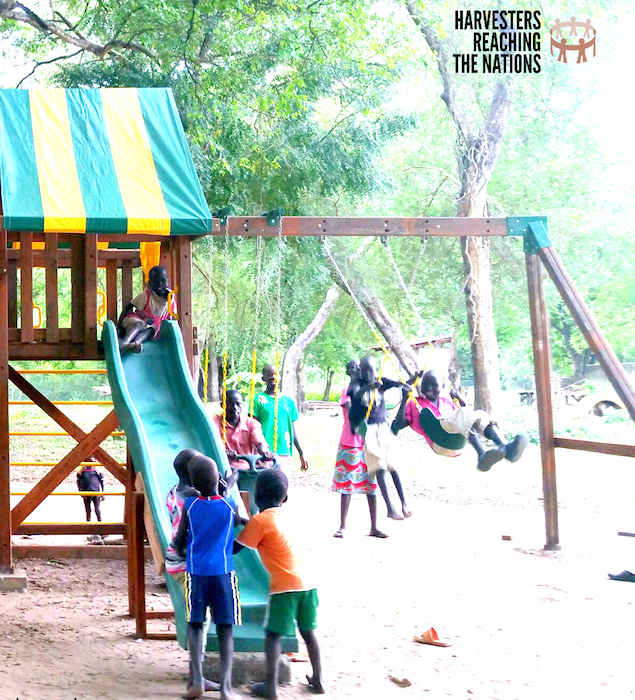 Children at an South Sudan orphanage in Africa play on an Eastern Jungle Gym swing set.

As soon as the setup was complete, it was clear that the wooden cedar swing set was a hit. The kids wasted no time exploring their new playground and sharing laughs as they swung through the air, zipped down the slide, climbed through the clubhouses and scaled the rock climbing wall.

“Seeing a photo of those children enjoying themselves on an Eastern Jungle Gym swing set is just about as rewarding as it gets,” said Rolf Zimmermann, Vice President of Sales for the company. “It’s amazing to think of all the places where we have helped create childhood memories over the last 23 years.”

The Fantasy is part of Eastern Jungle Gym’s Multi-Deck Series, which incorporates multiple towers, clubhouses, playhouses, slides, swings and more. With of all its activities, the Fantasy is one of many Eastern Jungle Gym playsets that can easily accommodate a large group of children varying in ages. The Fantasy features three clubhouses (two covered and one uncovered), a wave slide, a spiral slide, double-wide monkey bars, a tire swing and a rock climbing wall.

Eastern Jungle Gym’s Straight-Base and Angled-Base series are also able to entertain several children at once. These swing sets offer a single play deck with multiple swing positions on the swing beam, a slide, a rock climbing wall and a variety of other activities: tire swing, picnic table, sandbox, horse glider swing and so on.